Lawmakers in at least 23 states, often encouraged by vaccine skeptics, have proposed banning employers from requiring workers to get vaccinated against COVID-19 or other infectious diseases. Most bills are sponsored by Republicans, who say employees shouldn’t have to choose between getting a shot and staying employed.

“I just kind of like the idea of personal freedom, and that’s one of my biggest things as a legislator,” said Republican state Sen. Dennis Kruse, who sponsored one such bill in Indiana.

Although vaccines protect individuals and communities from disease outbreaks, online disinformation has turbocharged some people’s concerns about vaccine safety and potential mandates in recent years. Some anti-vaccine activists have spread false information about the science and public policy surrounding immunizations.

Yet despite lobbying from anti-vaccine groups, often known as anti-vaxxers, the employer mandate bills are unlikely to pass, experts say. That’s because the proposals threaten employers’ legal obligation to maintain a safe workplace and could put the lives of workers, customers and patients at risk.

Federal guidance issued in December allows employers to require that their workers get COVID-19 vaccines, although they must accommodate employees’ religious objections and also make sure vaccine requirements don’t discriminate against employees with disabilities.

Accommodating a religious objection could involve changing an unvaccinated worker’s job duties to maintain a safe workplace. For instance, employers could ask workers who refuse immunization to work remotely or wear protective gear. 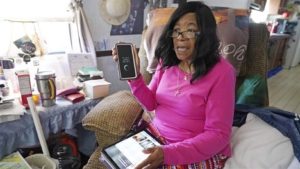 STATELINE STORY February 10, 2021: Vaccine Signups Cater to the Tech-Savvy, Leaving Out Many

Kruse’s bill would have applied to all vaccines, not just COVID-19, which particularly alarmed public health experts. “The main concern is that this applies to all vaccines in all contexts,” Patrick Glew, a program manager for the Indiana Immunization Coalition, a nonprofit that advocates for vaccinations, said when he testified against Kruse’s bill in January.

“If you do not have to get a vaccine for these [diseases] as a hospital worker, as a doctor, as a nurse, as somebody who works in health care, you’re not only making a decision for yourself,” Glew said. “You’re making a decision for everyone else you treat, too. You’re putting them at risk.”

Nationwide, the bills could face opposition from both business and public health groups, said Dorit Reiss, a professor at the University of California, Hastings College of the Law in San Francisco.

That’s exactly what happened in Indiana, where the state Chamber of Commerce, health care groups and public health experts all opposed Kruse’s bill. His legislation also would have allowed workers who had been punished by their employers for refusing a vaccine to sue for damages.

Republican state Sen. Phil Boots, who co-sponsored the bill, killed it last week by declining to bring it up for a committee vote.

“There was simply not enough support for the bill to move forward in the legislative process,” he said in an email to Stateline. “Many of my colleagues felt that federal exemptions are adequate … and that the bill went too far in the potential employer penalties.”

A similar bill in North Dakota has failed, and most of the other bills have yet to receive serious consideration. But vaccine skeptics say they’re not giving up.

“We are just getting started,” said Ashley Grogg, founder of Hoosiers for Medical Liberty, a group that represents vaccine skeptics and worked with Kruse on his bill. “There’s going to be more to come next year.”

Even then, states often allow families to opt out of vaccination requirements for medical reasons or because they have religious or philosophical objections. Some states also require vaccinations for college students and certain health care workers, also with exemptions.

Before the pandemic, most businesses didn’t require workers to get immunized. The exceptions included some hospitals and health care settings that serve people with weak immune systems—such as newborns, cancer patients or older adults—for whom an infection could be fatal. 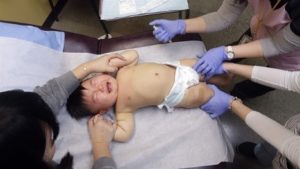 So far only a smattering of employers, such as some nursing homes, are requiring workers to get the new COVID-19 vaccines. The vaccines aren’t yet widely available to the general population.

Still, some vaccine skeptics worry about the small number of people who’ve suffered allergic reactions to COVID-19 vaccines and want more data on its long-term effects. The federal Centers for Disease Control and Prevention has reported rates of fewer than five cases of anaphylactic shock per million doses, and recipients are monitored for 15 minutes after receiving a shot.

Anti-vaccine activists also point to examples of people refusing vaccines and getting fired—such as a recent case where a Wisconsin nursing home laid off staff who declined immunizations—and say that workers should be able to refuse a vaccine for personal reasons, not just religious or medical reasons.

In a January survey released by the Kaiser Family Foundation, a San Francisco-based nonprofit that researches national health issues, 53% of respondents who said they will “definitely not get” the vaccine either believed or were unsure about three common myths: that the vaccine contains the live COVID-19 virus, that the vaccine causes infertility or that people must pay for the vaccine. None of those is true.

The U.S. Food and Drug Administration has given COVID-19 vaccines emergency, not permanent approval. That gives people reason to be cautious, said Grogg of Hoosiers for Medical Liberty. “This is still an experimental treatment, or vaccine, and that’s not something that should be required.”

Grogg’s group also wants to make it easier for workers to opt out of vaccines that have gone through the FDA’s permanent approval process, such as flu vaccines.

Public health experts note that millions of COVID-19 shots have been given with few ill effects. More than 43 million people have received at least one vaccine dose, according to the Centers for Disease Control and Prevention.

While nearly two-thirds of Democrats said they’ve either already been vaccinated against COVID-19 or plan to get vaccinated as soon as possible, just a third of Republicans have been vaccinated or are eager to be vaccinated, according to the Kaiser survey.

Nearly 1 in 10 Republicans said they’d only get vaccinated if required to, the survey found, and 25% said they would “definitely not” get the COVID-19 vaccine. 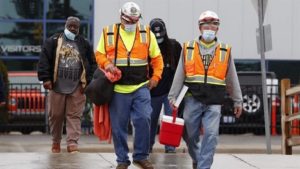 The survey found that the increased enthusiasm is among Democrats and independents; Republicans have not shifted their views significantly.

Wisconsin state Sen. André Jacque, the Republican sponsor of a bill that would block employers from requiring COVID-19 vaccinations, said that while he supports vaccines and gets his recommended shots, he thinks workers should have a choice.

“Their choice of whether or not to receive a COVID-19 vaccine should not put their ability to make a living and provide for their family at risk,” he said. Jacque also has authored legislation that would ban state and local governments from requiring COVID-19 vaccinations.

Some Democrats agree. Maryland state Del. Nick Charles, a Democrat, has sponsored a bill that would prohibit employers from firing workers for refusing to be vaccinated against COVID-19.

“This is definitely not an anti-vaxxer bill. It’s none of that,” Charles said. He said he wants as many people as possible to get vaccinated and that he’s already been vaccinated himself.

But realistically, he said, some frontline workers in the mostly Black community he represents don’t want to get vaccinated or are unsure about it, and he wants to protect them. 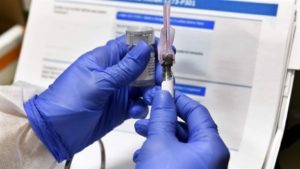 Charles, who is Black, said it’s important that lawmakers discuss the bill now, in case Maryland employers start requiring vaccines later this year when the shots become widely available. “While we have the power during session, I want to make sure we put something on the books,” he said.

Jacque’s employer mandate bill was folded into the Wisconsin legislature’s COVID-19 relief package, which Democratic Gov. Tony Evers vetoed this month in part because it prevented businesses from requiring vaccinations.

Bills in other states haven’t even made it to a committee vote, for a variety of reasons including opposition from business groups and public health experts.

The Indiana Chamber of Commerce opposed Kruse’s bill because it could interfere with employers’ legal duty to provide a safe workplace and because it would let workers sue their employers if they faced consequences at work for refusing vaccines.

“Does the employee’s right supersede the employer’s right to provide that safe environment?” asked Mike Ripley, the chamber’s vice president for health care policy and employment law, during the January hearing.

Even health care employers are hesitant to establish mandates. Nursing home and assisted living leaders in Indiana are encouraging, rather than requiring, employees to be vaccinated because they know some workers are wary, said Zach Cattell, president of the Indiana Health Care Association, a trade group that represents such facilities.

At the same time, he said, long-term care employers know workers who refuse the vaccine put one another and their clients at risk. “The balance of those issues is not easy to sort through,” he said. About 41% of all people who have died from COVID-19 in Indiana lived or worked in long-term care facilities, according to The New York Times.

The best way to keep workplaces safe from COVID-19 and other diseases is to encourage workers to get vaccinated and make it easy for them to do so, such as by hosting vaccine clinics, said Silverman of Indiana University. He said employers should also think holistically about safety, such as by providing protective equipment.

Vaccination mandates, he said, risk a backlash. “That’s really where I think most of the conversations should be leaning, is how can you make workplaces safe as a system,” he said, “rather than trying to create a requirement for vaccination.”

Employers are already thinking that way, said Tracy Billows, co-managing partner of the Chicago office of Seyfarth Shaw LLP, a law firm with posts in over 170 countries. Billows has been tracking vaccine mandate bills for her firm’s clients.

“I have to be honest with you,” she said. “Many employers think they’re going to get a much better participation rate from it being voluntary.”

Source: Republished with permission from Stateline, an initiative of The Pew Charitable Trusts.

Italy’s Top Insurer Generali to Invest €3.5B in COVID-Hit European Countries
News
Made with coffee & love by ThemeBubble ©All rights reservd.